Showing posts from February, 2017
Show all

- February 15, 2017
Every so often Aldi sells mushrooms for really cheap. 8 ounces of baby bellas were 89 cents. A one pound bag of sweet mini peppers were $1.69. Cilantro bunch for 79 cents. The ingredients spoke to me and the word they said was Mexican. Also this dish was meant to pair nicely with my sweet pepper puree I'd made in the previous post, which it did. Ingredients 1 cup cremini mushrooms diced 1 cup celery diced 1/2 cup sweet peppers diced 7 cloves minced garlic 3 ounces ice beer 2 ribs/seeds from a jalapeno and 1 from a habernero 1 tbl olive oil water salt and pepper 1/2 cup fresh cilantro leaves dried paprika, red pepper flakes, basil, sage 1/2 cup dry pearl barley 1 can rinsed and drained black beans To make the broth add the mushrooms, celery, peppers, garlic, beer, ribs/seeds, oil and salt and pepper to a large pot. Add enough water to cover by at least an inch. Bring to a boil and then simmer at least 10 minutes. Taste broth. Adjust salt and pepper if needed. A
Post a Comment
Read more 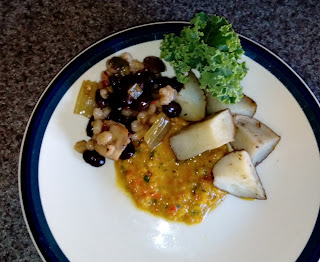 Aldi had a one pound bag of sweet mini peppers for $1.69, so it seemed like a great reason for a puree. The peppers were all reds, oranges and yellows so I knew they would taste great. I diced some for a broth I made for cooking barley and beans, but that's another post. I wanted a sauce that I could put on salads, bagels, use for dipping and on sandwiches. Ingredients 10 sweet mini peppers roasted 5 large cloves garlic roasted 1 cup cilantro leaves 1/2 japalpeno 1 habernero 1 lime - zest and juice 1 tbl canola oil 2 tbls white vinegar 1/4 cup water salt, pepper Preheat oven to 400 F. Roast peppers on a sheet tray for 7 minutes. Use a tongs to turn over. Add whole garlic cloves. Roast another 6 minutes. When peppers have cooled, cut into smaller pieces and discard seeds and stems. Add to blender. Remove cilantro leaves from stems and also add to blender. Add remaining ingredients. Puree until smooth. Taste. Add more salt and pepper if needed. If I had
Post a Comment
Read more

- February 05, 2017
So I did something stupid. It wasn't supposed to be stupid, but it turned out that way. I believed the hype and thought I wasn't getting enough B12 from cereal, nooch and cheese. So I got a supplement. Didn't take it every day. Once a week for 3 weeks. I read all over that B12 is water soluable and not dangerous in high doses. Is flushed out in the urine. Can't be stored in the body. Well, it's been stored in my body. Specifically in my lower jawbone. Or rather two protusions that erupted from it. One in the front and one way in the back. I went to the dentist and the oral surgeon. It's not teeth. All my wisdom teeth are exactly where they've always been. I've also never had teeth extracted. It's not leftover tooth or bone from a dental procedure. It's not tori or bone spurs. It's not symmetrical and it also shrinks when I stop eating certain foods and grows when I eat others. Literally hours after consumption. I stopped the vitamin.
Post a Comment
Read more
More posts