Showing posts from January, 2013
Show all

Two Sandwiches You Need To Be Eating

- January 27, 2013
Here are a couple of quick and tasty sandwiches you can make in a snap. I love sandwiches for breakfast because they're so filling and tasty. I enjoy them for lunch as well, for the same reasons. They're portable. They're easy to assemble. They offer great flavors and textures and are very inexpensive. A really easy one is the vinaigrette sandwich. It's totally vegan and totally delicious. Start with a sesame seed bun and lightly coat both sides with balsamic vinaigrette dressing. If you use the store brand it'll be even cheaper. Store brand dressing tastes exactly the same as premium. You have to experiment. Every store brand is different. Add rinsed black or red beans or a combo of both. Add sliced red onion and romaine lettuce and roasted garlic and roasted red peppers. All these things are optional. Add whichever you like or have on hand. Just be sure to add at least one for a satisfying variation of textures. Top sandwich with hot sauce. You can g
Post a Comment
Read more

- January 24, 2013
Once you go vegetarian it's in you. You're never the same again. You may falter or waiver or even eat meat, but it will never be as it was. You are changed permanently. I've discovered I no longer like chicken soup. Of any kind. Of any sort. Not with rice. Not with barley. Not creamy and roasted with garlic. It all just tastes so slimy. I'm kinda falling back into familiar food habits. Like beans and potatoes and vegetable broth. It's just more appealing. Not that I don't have cravings. Been wanting a hamburger for several weeks now. And I really don't have any issues consuming one. But then again, I guess, I kinda do. Am torn I guess. Dunno. Have kinda lost my vigor about the whole subject. It seems a little bit pointless. Society will do whatever it wants to regardless of my choices. And everything else is so shitty. Why shouldn't I enjoy what I can. I guess I would probably. If I could afford it. But on the other hand, I love the vegetarian/ve
Post a Comment
Read more 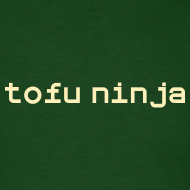 Are you a tofu ninja? If so you need the t-shirt to prove it. It would be irresponsible of you to walk through the world being a tofu ninja without warning the ordinary folks about your super powers. It's the right thing to do. We ninjas of tofu know what it's like and need to spread the word. It's awesome and everyone should try it. They're missing out and it's a shame. A damn shame. Not only is tofu delicious, but on top of that, it's also one of the best words in the English language. Though it's really Japanese. That's okay. Because it counts as English now too. Why can't we all just get a long? Let's not fight over the rights to this spectacular word and the spectacular food for which it stands. Let's just wear our tofu ninja t-shirts and eat our tofu and make the world a better place one ninja at a time.
Post a Comment
Read more

- January 16, 2013
Simple is always delicious. At least, that's my motto. Roasted potatoes are the best. I love them plain all by themselves fresh from the oven. Crispy on the outside and soft and tender within. Potatoes are rich in vitamin c and iron. Roasting potatoes with the skin on is key. The skins taste great and are packed with nutrients. I like the cut them pretty small. 1/4 inch chunks. Generously spray sheet pans with cooking spray. Sprinkle with salt and pepper. Roast at 425 degrees F. Cook for 16 minutes. Stir. Top with 12 peeled garlic cloves. 1 sliced red bell pepper and 1 small sliced yellow onion. Cook for 16 more minutes. Most folks would probably just eat the potatoes as is and that would be great. But they can do more. Try adding your oven roasted potatoes to a bowl and them top with the roasted garlic diced, the onions and the red pepper and also add a spoonful of rinsed canned black beans. Add some hot sauce and some vinaigrette salad dressing. If you like, some chopped al
Post a Comment
Read more

- January 14, 2013
There's something interesting that happened to me throughout the course of my changing diets. When I went vegan I got my period once every 4-5 weeks like clockwork. Prior to that, my whole adult life, I'd only gotten it every 8-10 weeks or so and it was always sporadic and unpredictable. It had always been like that, ever since I first got it. But for some strange reason, which I can only guess is indicative of how healthy a vegan diet really is, it became regular when I was eating that way. As soon as I went off the vegan diet it went back to a more uneven pace. With a vegetarian diet it came more often too. Usually at about 6 weeks or so. Eating meat seems to give me the biggest gaps between. Interesting phenomenon to say the least. Curious really.
Post a Comment
Read more

Cake and Cheese and Hot Sauce

- January 12, 2013
I've been flirting with the vegetarian thing again. I'm kind of addicted to candy right now... so milk is a part of the diet. But I'm repulsed by meat all over again. It really is pretty gross. Been enjoying my bean sandwiches and my vegetarian chili and crazy rice concoctions. All good stuff to be sure. If you douse anything with hot sauce it'll pretty much taste great. If you sprinkle anything with Cajun seasoning same effect. Add some curry for a third magical transformation of dull food into delicious. That's pretty much my repertoire these days. Am still disgusted by cow's milk. It's pretty icky. Especially the store brand with untold growth hormones. Somehow I've been getting by without any milk of any kind. Almond, soy or otherwise. My bones are probably turning to jello as I type this, but who knows. I've also been avoiding B12 like the plague. I like that feeling of lighheadedness that goes along with it. I know I'm supposed to get i
Post a Comment
Read more

- January 02, 2013
Things have been tight financially. The luxury of vegan foods is off the table. Of course there are many every day foods that fit the bill. But by and large, a vegan diet, is more costly. That's sad and wrong and unfortunate, but factual just the same. Bean sandwiches are much cheaper than meat sandwiches. So score one for the vegan side. But fresh roasted potatoes are more money than dehydrated potato flakes. Maybe it all works out to the same cost in the end, regardless. Ten cents here, fifty cents there. Who knows. Cheese is very high priced. So vegans save on that if they don't spend on vegan cheese. But darn it, it tastes so good. Personally, even as someone who has fallen back into meat consumption, I still love a good bean sandwich. They are really good. A toasted everything bagel... some vinaigrette dressing, a little slice onion, some lettuce and 2-3 spoonfuls of rinsed black beans. I'll take that over cold cut any day of the week. The difficulty ensues whe
Post a Comment
Read more
More posts