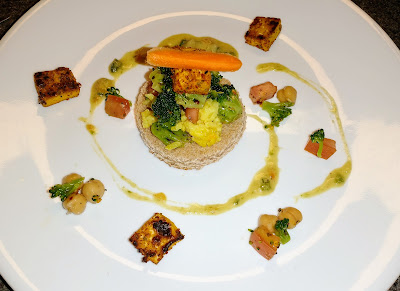 There's always been a disconnect in my head between classic French sauce techniques and how to use them with vegan ingredients.

That is how I arrived at some of my tofu based sauces. I figured I needn't worry about how to thicken them. The tofu would do that without any intervention on my part.

Still, I've always suspected that the simple act of reduction might work on plant based milks. My logic, reduce the amount of water content and they will eventually thicken.

It takes some time and some patience, but it does happen. I found it easiest to just set it on the stove and do something else nearby for a while. If you stand over it, it'll feel like an eternity and you'll never let it go far enough. 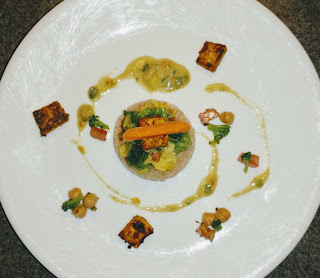 Begin by toasting the garlic, peppers and salt in a cold, dry pot over medium heat until it's fairly hot. Stir in the oil and continue to simmer for 5-7 minutes, until quite fragrant.

Pour in the almond milk. I used original flavor. This is slightly sweet and needs more salt. Unsweetened would no doubt require less salt.

Make a mental note of where in the pan the top of the almond milk touches. You'll need to remember this to know when it has reduced by half.

Simmer uncovered until reduced by half. Be careful to only simmer and not boil. If it boils your sauce might break. It'll take a while to reduce. Probably 15-20 minutes.

Turn off the heat, but keep it on the stove.

Whisk in the yeast and mustard.

Allow to cool a few minutes more to thicken further.

It's always satisfying to take something so traditional and adapt it to be vegan. Especially when it tastes as good as this does.