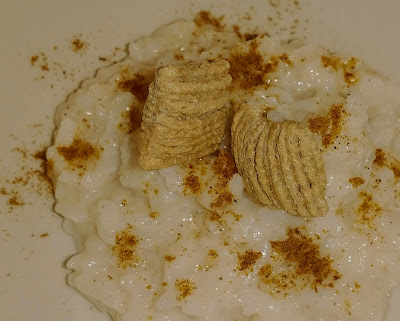 There are plenty of vegan rice pudding recipes already out there.

Ones that start from scratch and many more that use leftover rice.

Rice pudding is one of my favorite desserts. I've always loved it.

What sets this one apart is the ras el hanout.

I had lots of almond milk and lots of leftover rice, but I didn't have any  cinnamon or nutmeg on hand, so ras el hanout seemed like a really interesting substitute.

I used leftover chinese takeout rice. I had a pint and I added it to a medium sauce pan. I added enough almond milk to cover the rice.

Let that simmer for a bit until it begins to thicken some.

Continue to simmer over low heat. Stirring often. It's done when the rice is creamy and the overall texture is somewhat thick and pudding like.

Keep adding almond milk in 1/2 cup increment until the rice is soft.

Keep in mind that cooling will thicken it further. Don't over thicken it on the stovetop. You want it a little loose.

The spice mix does not turn it savory, but rather adds a new and unexpected dimension to complement the sweetness.

If you're saving some for the next day, add 1/3 cup more almond milk before storing overnight in the fridge in an airtight container.