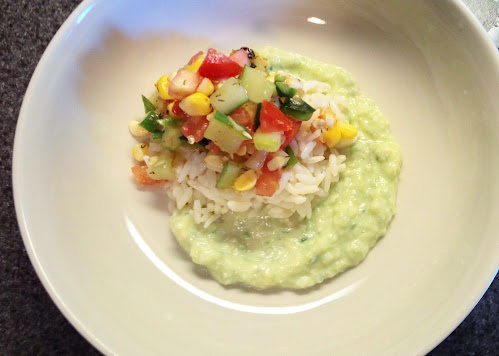 My co-worker gave me some cucumbers she and her husband had grown in their garden. I wanted to use them right away as they were so fresh. This is a variation on a classic cucumber and tomato salad. I added charred corn for sweetness and smokiness. I also added poblano and jalapeno for spice.

I wasn't about to turn on the broiler to cook the corn. It's been in the 90's here. Instead, I used the same technique often used to char bell pepper. Put the shucked ears directly over a gas flame on the stovetop. If you don't have a gas stovetop you can broil them or use an outdoor grill.

The corn will pop and make a bit of a mess on your cooktop, but it's worth it.

Char the corn evenly all around. Allow to cool and them cut the kernels off the cob.

Stir together all ingredients.

Why the garam masala? It just adds that nuance that makes everything pop. It's not enough to turn the dish indian in flavor. It's just a whisper in the background that enhances all the other flavors.
corn cucumber mediterranean plant based tomatoes vegan