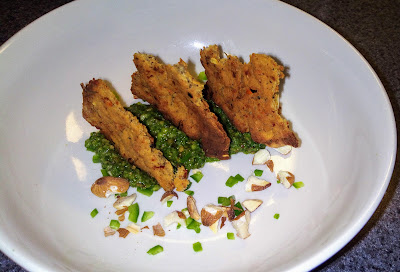 I thought I'd try to create some kind of crunchy flatbread that was nearly no carb for him that was also plant based for me.

If I had sunflower seeds, I probably would've ground a 1/4 cup of those as well and added them to the mix, but I made due with the things I had on hand.

It's weird working a bread dough that doesn't have gluten. It never gets that familiar texture of regular bread dough. You kinda wind up with a soft, moist dough you can mold. It's similar to play dough. You cook it up and it becomes firmish. If you cook it more it gets kinda crunchy. Either way, it's sorta crumbly. It's a satisfying texture given the limitations and it has good flavor.

I was actually surprised by how much I enjoyed it even though I'm very pro-carb. I ate the whole first batch on my own and had to make a new batch for him to try.

On my first go around I didn't use the tofu. This yielded a slightly crumblier bread. I figured some tofu might give a little more of that classic pull to the final product once it reached room temperature. I suspect that a firmer tofu would actually work a little better in that respect.

I didn't really measure my ingredients, but these are estimates of the amounts I used. I added the water very slowly until I had a dough that held together and could be shaped.

I pressed it flat on a greased baking sheet until it was fairly thin. About 1/4 inch thick. Then I baked it at 425 F until firm and golden.

You can do individaul rounds or one large.

Allow it to cool completely before attempting to move.

I find it improves as it rests. Several hours later it's much better than fresh from the oven. It also doesn't stale like regular bread. It pretty much stays the same over several days.