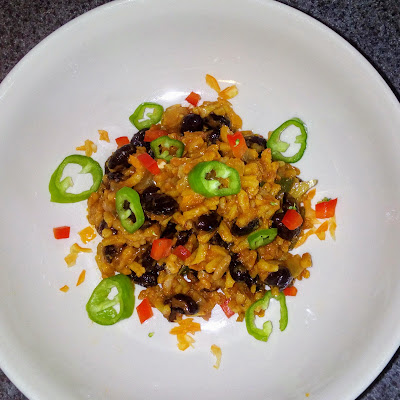 I watch a lot of cooking shows. I kinda have an addiction to them. Masterchef is one of my favorites. Masterchef UK is the best. Masterchef US is a little full of itself, but still great. Masterchef Canada is good, but too few episodes. Now I've started watching Masterchef Australia. They speak English, for the most part, so I can follow the action.

I'm learning all kinds of weird Australian words for common everyday things. Apparently, a balcony is a gantry there. And chills are called capsicum.

On a recent episode they did paella. The entire hour long episode was focused on this very famous Spanish dish. It's full of saffron and paprika. Two flavorings that I adore.  It really made me want it. It's also full of seafood. Obviously, that would need to be omitted in my version. But I am confident that the vegan paella that I created has the same level of depth and unctuousness as any made with murdered marine life. 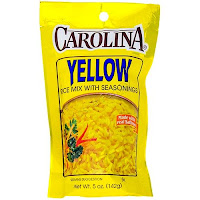 Saffron being incredibly expensive posed an obstacle. But Carolina brand rice sells a little 5 ounce packet of saffron rice for less than a dollar. Rather than start from scratch and buy saffron, I used this as my base. There's nothing in the rice but spices. It's vegan. I live on the east coast. Here it's branded Carolina. However, on the west coast, I believe it's branded Mahatma.

Paella also uses stock for flavor. Depending the the recipe's author, it may be seafood, chicken or vegetable stock. I don't usually have vegetable stock on hand. I'll make it sometimes. But it's July. I'm not making stock. Tomatoes are also a common component. I didn't have those either.

What I did have was low sodium V8. It has to be low sodium. That yellow rice is high in sodium. If you add much more you're going to wreck it with way too much salt. But what the V8 does perfectly is take the place of both vegetable stock and tomatoes in one tiny little can. If you read the ingredients, it basically is vegetable stock fortified with tomato juice. I use the little can. 5.5 ounces. That's all it takes.

The rest is easy. Some black beans. Some additional spices. A little bit of patience.

In a large, heavy skillet, saute the onions, peppers and garlic in 2 tbls of the olive oil. When those are tender add the rice packet, paprika, cayenne, coriander and cumin. Toast for 2 minutes until fragrant.

Add 2 cups water. Simmer over medium high heat until most of the water is gone.

Add beans, 1 cup more water and V8 juice. Keep simmering. As the water is absorbed and evaporated, you'll need to taste the rice for tenderness. When the rice is nearly done add remaining 1 tbl olive oil and another 3/4 cups water. Allow that to simmer until almost dried out. Check rice again. The rice should be done by now. If not add more water in 1/2 cup increments until it's tender.

When the rice is done, Let the pan continue to cook to develop your crispy, dark rice on the bottom. It's called a socarrat. It browns the rice and develops the sugars in the mixture. You have to get it brown, but keep it from going too far. But you can't stir it at this point. Use your eyes, nose and ears to know how far to take it. It's essential and worth the risk. Be vigilant and you'll be rewarded with a complex symphony of sweetness, heat, textures, earthiness, acidity and salinity.

It's one of the best things I've ever eaten.
rice spanish vegan