My Best Ever Vegan Mac and Cheese 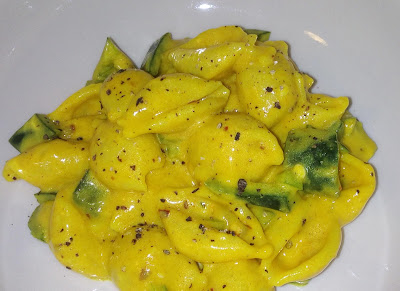 I don't usually get food cravings, but I had the worst mac and cheese craving. Vegan mac and cheeses I've made in the past crossed my mind, but they were a lot of work.

It's summer and it's hot and I didn't want to do a lot of work or buy a lot of ingredients that I didn't already have on hand. Still I wanted some mac and cheese so much that I almost considered buying actual mac and cheese.

It's summer and it's hot and I did not want to mess around with the food processor or a whole mess of ingredients. I kept it very simple. Sometimes simple is the most important ingredient in the recipe.

It turned out so perfect and satisfied my craving so beautifully. I could not have been more pleased. I think I actually love it more than real mac and cheese.

For the Roux
Olive oil
Flour

Start by cooking the pasta. I use Alton Brown's cold water pasta method.

When the pasta is al dente, remove it to a storage container and set aside. Keep at least a cup of the starchy, salty pasta cooking water for later use.

I used the same large sauce pot that I cooked the pasta in to create my sauce.

Coat the bottom with olive oil. About 3 tbls. When the oil is warm whisk in your flour. I added 2 spoonfuls of flour and whisked vigorously until it turned golden. I added another half spoonful and continued whisking until the oil and flour became a loose medium blonde paste.

At that point I whisked in the can of coconut milk. Keep the heat pretty low. Whisk briskly. You don't want lumps and you don't want it to thicken too quickly or too much. It will get thick pretty fast. Remove from the heat when it's a cheese sauce consistency.

It will be pretty thick at this point.

Whisk in 1/4 cup of the pasta water. Return to a low flame and continue whisking. Add more pasta water as needed to achieve the desired viscosity on the sauce.

When you're happy with the sauce, remove it from the heat and stir in the set aside shells. Also stir in the chopped chili peppers.

If you love mac and cheese, but don't want to eat cheese, I think this version will really make you happy. It's easy. It's quick. It doesn't have many ingredients, but it's very rich, creamy, cheesy and incredibly satisfying.