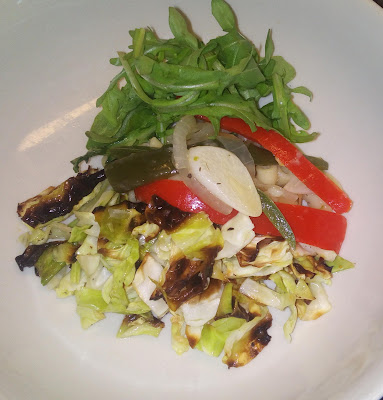 If you've had charred cauliflower and enjoyed it, this is something else you'll probably like a lot. Same principal, different cruciferous vegetable.

Chop white cabbage fairly small. Toss with olive oil, salt and pepper. Go heavy on the salt and don't skimp on the oil, but don't drown it either.

Put it on a sheet pan in a single layer.

Broil on high near the top of the oven for 12-15 minutes until nicely charred.

It gets that same nutty flavour that people love in charred cauliflower. It gets crispy edges and creamy bits. It's a textural and flavor epiphany.

It's great to top other dishes. Try it on top of pasta to replace the grated cheese..It works as a base for salad. On sandwiches. Or you can just munch on a bowl of it. It's that good.
cabbage vegan