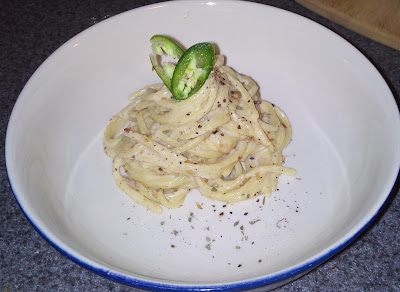 I've been watching 'Good Eats: Reloaded'. I was psyched to learn that Alton was revisiting some classics and also had new episodes in the works. Many TV chefs have inspired me over the years, but Alton was always the one that made me feel like I could do what he was doing. He made it accessible and realistic. The sock puppets and sci fi references only made it that much cooler.

So inspired by his Cacio e Pepe recipe, I set out to create a vegan version. I feel like it was a complete success. Creamy, cheesy, peppery and very comforting.

For me, that's the big hurdle to veganism. Lack of cheese. Everything else is easy to ditch. Good riddance. But cheese. You miss that stuff. So you come up with ways to trick your taste buds into thinking you're still getting it.

Cook pasta according to Alton's cold water method. When I first saw this, it blew my mind. Cook pasta in cold water?! Are you crazy, man?! But I tried it and it worked. I had already been doing this with ramen noodles and realized it makes sense. They absorb more of the flavoring from the cooking water using this technique. You're also much less likely to overcook them.

Start spaghetti in a very large skillet. Barely cover with cold, heavily salted water. Put a lid on it and bring to a boil. Remove lid and simmer until al dente.

Create sauce same as he does, just using the vegan ingredients instead.

Grind up sunflower seeds using a coffee/spice grinder. 1 cup of whole will yield the amount of ground needed.

Add ground seeds, yeast, pepper flakes, black pepper and oil to a large bowl. Mix with the back of a wooden spoon to form a paste. Slowly add pasta water until a loose sauce is formed. You want it pretty loose, kinda watery. When you add the pasta and mayo it will thicken up quite a bit.

Add in pasta and vigorously toss with tongs to coat in the sauce. Add vegan mayo. Stir aggressively with a metal spoon until a creamy sauce evenly coats your spaghetti.