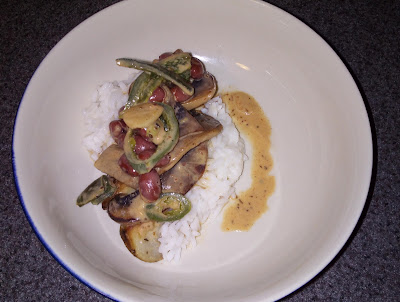 Completely inspired by the umami of mushrooms and the culinary clout of French brandy cream sauce.

The mushrooms are dark and deeply caramelized like little slices of vegan steak.

The mushrooms, caramelized onions along with the other ingredients in the pan come together to create the rich and creamy French style savory brandy sauce.

It's easy too. All the magic happens inside one large frying pan.

Saute mushrooms and onion in 2 tbls of the olive oil and 1 tsp of salt until nicely caramelized. About 10 minutes. When mushrooms and onions are nicely browned on one side, turn over and brown the other side. It's this deep browning that will provide flavor and depth for our pan sauce and give the mushrooms their meaty flavor..

Deglaze with brandy. Cook off for 5 minutes.  If you're not using non-stick, you could try flambeing the brandy.

Add beans, brine, garlic, peppers, spices, remaining salt,  water and remaining oil. Simmer briskly, stirring often until sauce begins to tighten. Careful not to over reduce. When sauce is somewhat thickened, but not quite true sauce consistency turn off heat and stir in vegan mayo. Stir thoroughly to fully incorporate. Let rest several minutes to thicken up til it coats the back of a spoon.
classic french mushrooms red beans sauce vegan