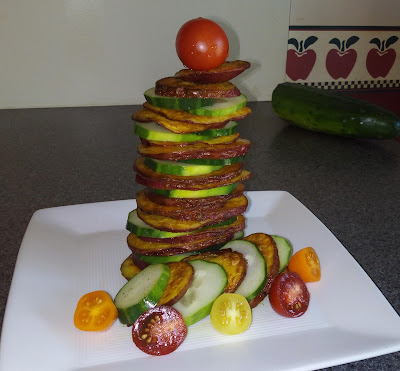 I was trying to come up with a way to add faux cheese slices to my lightlife vegan bologna sandwiches. This will probably sound ridiculous to anyone who isn't vegan, but it really does mimic the texture and flavor of an unmelted slice of  american cheese.

Waxy red potatoes are essential. Other potatoes would go too soft and crumbly.

I've always thought that turmeric not only has the color of cheese, but it also has a similar flavor. I combined that with salt and paprika to create my vegan potato cheese slices. The oil adds that essential fatty element to really seal the deal.

Slice the potatoes into thin circles. Brush each slice with oil on both sides. Arrange in a single layer on a baking sheet lubed with cooking spray. Season with salt. Sprinkle lightly with turmeric and paprika. Brush each slice to evenly coat with the spices.

Broil on high on the third rack from the top for 10 minutes or until nicely darkened. Turn off broiler. Leave potatoes in the oven for 10 more minutes.

I did not turn the potatoes to brown the other side. I felt the texture would be creamier that way.