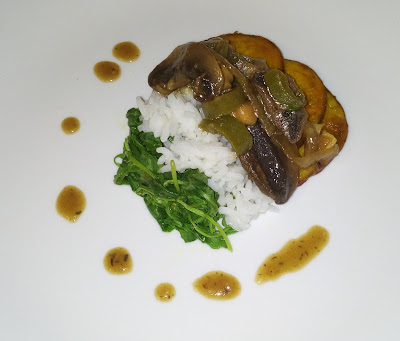 I decided to try a new ingredient that I've been curious about for a while now. Brandy.

It's used in a lot of sauces and french cuisine. I've seen it associated with cream sauces, pepper sauces, mushroom sauces. So I thought I'd give it a go and see.

I went with a mushroom and caper based sauce to keep with the french theme.

I've made similar sauces in the past, but the brandy definitely added a new level of nuance to the finished product.

Saute the mushrooms and onion in the salt and oil until nicely caramelized. This will take some time. At least 15 minutes. Stir it occasionally so they don't get too dark on one side. It's easiest to get them dark enough if you do something else while they're cooking. I busied myself by chopped ingredients for another dish while they cooked.

It's important to get a dark rich color on the mushrooms and onions. This will give the sauce depth. It will also provide sugars in the pan for the wine to pick up when you deglaze.

Once the mushrooms and onions are nicely browned deglaze with the white wine. Cook that out for several minutes. Then add the garbanzos/brine, mustard, garlic, jalapeno, capers/brine, brandy, black pepper and savory or sage.

Sprinkle in the flour. Stir to incorporate. Cook a few more minutes until sauce is slightly thickened.  Then remove from heat and allow sauce to rest a few minutes to further thicken up a bit.
classic french mushrooms sauce vegan wine