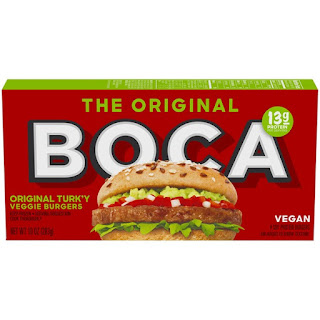 I often check the frozen vegetarian section of shoprite for boca vegan burgers. They usually only have the chick'n patties or the very large box of vegan burgers.

Last time I checked, I found the turk'y burgers four pack. I was pleased because they were labelled as vegan.

I had no lofty expectations. I've always been satisfied with boca products and assumed they'd be at least satisfactory..

They were actually very good. Better than I expected. Good taste and texture. A very pleasing sandwich.

Should they stick around, I'd definitely purchase them again. They're low cal and high protein. The taste is good. The texture is moist, but not mushy.