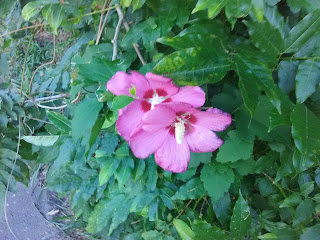 In April I took up running. I had never run before except for the mile way back in high school gym class. I had always been a cyclist or walker. It always seemed like running was for serious althletes and I was just the casual kind.

I was 43 years old when I first took up this new hobby of running. Had I known how great it could be, I would've done it years ago.

It was terrible at first. No lies. It was hard. Everything hurt. I could hardly go any distance without resting. But at some point I breached some magical threshold and it became a spectacular experience.

I credit my vegetarian/mostly vegan diet for how well it's gone.

For me, the runner's high is very real. I actually get stoned. My head goes numb. I feel invincible. I'm flying instead of running. There are wings on my feet.

Depending on the temps and how rested I am, it might last for 10 minutes or it might go on that way for more than an hour.

Today, it was 80 F and I had rested for 3 days at work. I had made sure to load up on carbs. The first 3 miles were not easy. They rarely ever are. But once I crossed that imaginary line, it was glorious. I ran for a good hour just as high as high can be. No actual drugs were involved.

It got to the point that I was so stoned I had to stop. Not from being tired, but just because my brain was drowning in dopamine. I paused for a few minutes. Had some water. Then went on for another few miles.

I truly beleive ridding my body of animal products is directly responsible for the wildly positive results I've gotten.

The foods we've been conditioned to eat are poisoning us. But ultimately, the choice is ours.