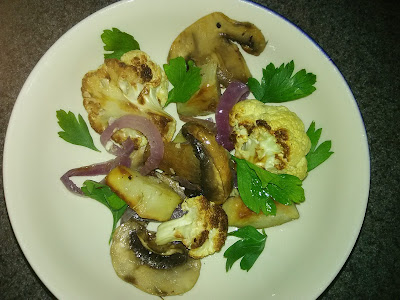 A post or two ago I detailed how caramelized shallots and mushrooms are the flavor bomb you need to add to your repertoire.

This is a similar idea. Broiled cauliflower, potatoes. mushrooms and red onion.

You haven't really eaten cauliflower until you've eaten it caramelized. It transforms into a completely different taste experience. It becomes nutty, earthy, sweet and a little bit meaty.

In a large bowl coat the potatoes and cauliflower in olive oil, rosemary, salt and black pepper.

Turn onto a large baking sheet lubed with cooking spray.

You can use the same bowl to toss your mushrooms, onions and garlic in oil, salt and black pepper.

Turn them onto a separate, equally lubed, baking sheet.

Broil the potatoes and cauliflower on high until nicely browned. Broil on the second rack from the top of the oven. Check after 15 minutes. Turn the pieces and the pan to get even browning.

Broil the mushroom mixture the same way. Keep a close eye on it. Everything will brown pretty quickly.

Add both mixtures back to the original bowl. Stir to combine.
cauliflower mushrooms potato vegan