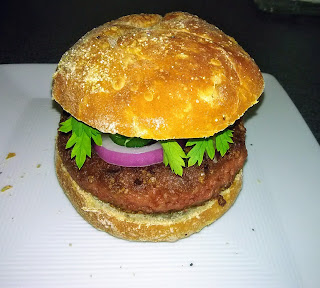 In an earlier post I detailed my experience eating the Impossible Burger at Houlihan's. This time around I purchased the Beyond Meat burgers from Shoprite and prepared them at home.

They were, no exaggeration, incredible. What I discovered from having the impossible burger was that, unlike traditional veggie burgers, you have to cook them like you're cooking meat. They need a browned outside crust, but you mustn't over cook them. Because like meat, they will stay tender and juicy inside when done properly.

It made grease in the pan. It smelled similar to a burger as it cooked. 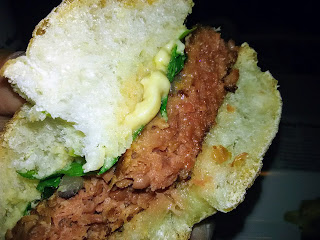 The aroma was less dead animal, more primal nourishment. It caramelized on the outside. Stayed pink and juicy in the middle. Like a regular burger, I used the touch test to know when to stop cooking it.

I went through several napkins joyously consuming it.

I kept mine vegan and simple as to enjoy all the mind boggling brilliance of the patty itself. Red onion, jalapeno, some fresh parsley and a little hummus on the top bun to hold everything in place. 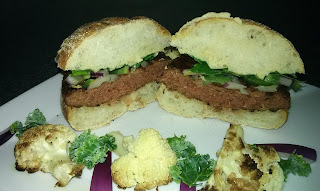 It was pretty pricey. $5.99 for two quarter pound burgers. I'm not a fan of eating too much faux meat and processed vegetarian products. But everyone needs a treat now and then.

I took several photos to show the texture and the juiciness. If you click on the closeup to enlarge it, you can see how its juices readily oozed.

As someone who never really missed meat, it's just a really fun concept to think that actual meat can be replicated. Perhaps changing the way meat devotees eat in the future.

I was not compensated in any way for this review. I just wrote it because this is a really wondrous product that has made huge strides in dismantling the cruel meat industry.
convenience foods vegan veggie burger