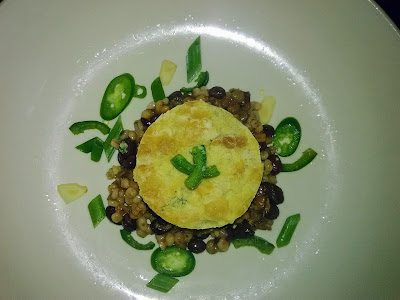 I was in the mood for biscuits. I've always been a fan. KFC biscuits first turned me on to the them as a child. Pilsbury fueled the fire. The first time I had those Red Lobster cheddar bay biscuits, I was practically dumbfounded. None of those, sadly, are vegan.

A quick google search for vegan biscuits will yield a plethora of contenders. I decided to go with the "southern vegan's buttermilk biscuits". That recipe just felt the simplest and most authentic. I did modify it though.

Rather than go out and get vegan margarine, I used vegetable shortening, which I already had. I also added fresh cracked black pepper, crushed pepper flakes, minced jalapeno and minced garlic.

I used about a 1/2 cup shortening to 2 cups flour. In retrospect, a little more fat would've been ideal. I'd say a few tablespoons of olive oil would work nicely in the mix. I also think a little more salt would've been nice. The original recipe calls for only 1/2 a teaspoon. 1 full teaspoon could really punch up the flavors.

But on the whole, a delicious vegan biscuit anyway you interpret it.