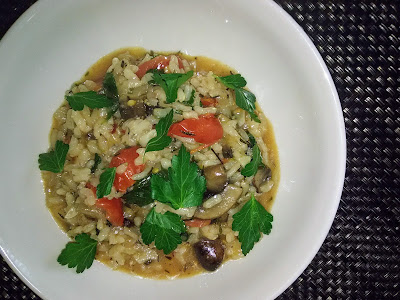 I was really focused on making sure this had the same depth of flavor that is found in typical risotto made with chicken stock and Parmesan cheese.

This particular recipe is unique in that it doesn't use vegetable stock. I've always found that creates a very salty end product. Instead I used a some liquid from a can of garbanzos for salinity and depth. Fresh vegetables, tomatoes and flat leaf parsley round out the profile.

I don't, however, believe risotto needs to be fussy. It needn't be constantly stirred or tended. Just make sure to stir it often to release those starches.

The original concept was without tomatoes, but upon tasting the partially cooked dish, it was obvious that some acid was required. The tomatoes also add a pop of texture. 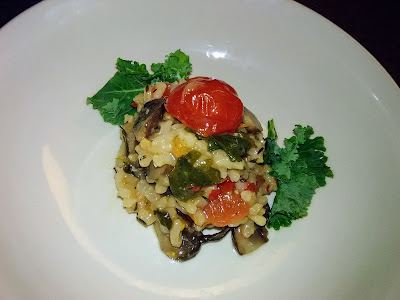 Cook the mushrooms and onions in 2 tbsls of the olive oil and 1 tsps of the salt. When mushrooms are softened add 1/3 of the wine. Allow to cook down until mostly dried up. Add rice, 1 tbl oil. Toast the rice for several minutes. Stirring often. Deglaze with another third of the wine. Also add the garlic, garbanzo can liquid. Simmer until mostly dry.

Add remaining wine, oil., another cup of water, tomatoes, yeast, parsley.. Stir thoroughly. Simmer until liquid has become a thin sauce. Taste to test doneness on rice. It should be tender by now. Add more water if needed and simmer longer if required to finish rice.