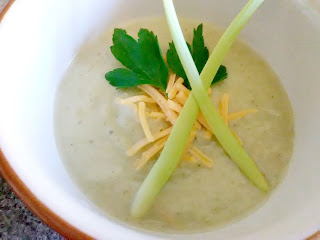 I've wanted to make potato leek soup for some time, but have never actually done it. Finally, inspired by my local farmer's market and the availability of some beautiful and inexpensive leeks, I decided the time had come at last.

Potato leek soup is a classic french recipe that's been done countless times. My spin on it is the addition of a little bit of jalapeno, some lemon and some wine. I tend to want to chuck a lot of things into one pot, but I really exercised a lot of restraint here. I think the simple approach really paid off.

The thing about leeks is you have to clean them well. They get a lot of soil and grit trapped in them as they grow. Cut them in half. Discard the out leaves and rinse thoroughly.

In a very large stock pot sweat the leeks in the olive oil. Slowly cook them down over a low flame until they're tender and fragrant, about 15 minutes.

Turn off heat. Use a potato masher to break up the spuds until you have a lumpy soup.

Now you have a choice. You can whisk and serve as a lumpy, but delicious soup. You can, if you have one, use a fine mesh strainer (chinois) to create a very smooth soup. Or you can use an immersion blender to puree it a little bit.

Using a blender with potatoes is a no-no. It turns them gluey and gloopy. But just a 10-15 second buzz is a pretty safe and easy way to and create a much nicer texture without any fancy french doodads.
classic french leeks potato soup vegetarian