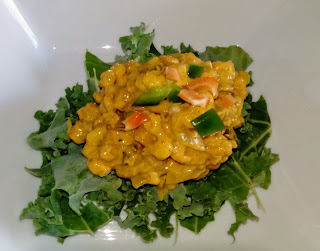 I wanted to make a vegan coconut lime curry. Which I did. It was a good broth/sauce that had a bit of heat. I didn't take a picture of it by itself. But it was good. But there are lots of recipes and pics of such sauces on the internet. Did we really need another? Yes, no, maybe so. Doesn't matter. What I've created is a totally new take on vegan mac and cheese.

Using the coconut lime curry sauce and adding to it barley and lentils turned the whole thing into a rich, creamy, cheesy vegan dream.

I know, everyone says that about their vegan mac and cheese, but in this case it's actually true.

Though technically not mac and not cheese. But when I ate it felt like that was just what I was eating. The trick is that the starches from the barley and lentils thickened up the coconut curry sauce in such a perfect way.

Start by adding the all the ingredients in the first list to a large sauce pot. Also add all the spices except the cayenne.

Simmer, covered over low for 15 minutes to steep all the flavors. Taste the broth. It's already really good, right! You could use it as is as a great sauce over rice and beans or tofu. But if you want that creamy, cheesy deliciousness you crave, you'll have to go a few steps further.

Add barley and lentils and 1 cup more water. Simmer over medium, still with the lid on, until most of the liquid is absorbed. Continue adding water 1 cup at a time until lentils and barley are almost, but not quite tender. Always making sure to keep everything moist by adding more water as needed.

When the lentils and barley are almost tender you want there to still be a good amount of sauce in the pot. Everything should be loose, not too thick yet. If not, add another 1/2 cup of water. Turn off heat. Add zest and juice from lime and the cayenne. Recover. Let stand for 5 more minutes.

At this point, give it a few more good stirs and your vegan mac and cheese should be rich and creamy and ready to eat.
coconut milk curry mac and cheese thai vegan