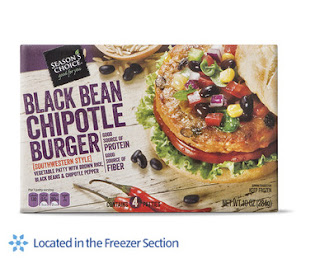 I tried Aldi's own brand of veggie burger. I opted for the chipotle black bean variety. For $2.49 I figured why the hell not give it a chance. It's in the frozen section near the real meats. It has 150 calories, which seems a little high, but not terribly so. The ingredients aren't too bad. First two are black beans and brown rice. So that's good. The rest are mostly unoffensive. It didn't appear to contain eggs for those who are trying to avoid chicken abortions. It is processed in a plant where eggs, milk and fish are also processed.

It was a little greasy. Nothing off putting, but it was noticeable. I think the extra fat actually enhanced the flavor a lot because it did taste really good. I had mine mixed in with my salad. While pre-made veggie patties aren't the ideal food, sometimes you just want something easy and tasty.

As a fan of heat and spice, I didn't find them spicy at all. But I've come to expect that from all commercial foods claiming to be spicy.

In my mind I was comparing them to other veggies patties. Quorn patties and light life patties are two of my favorites. This was different, but equally as satisfying. It kinda tasted like something you might make yourself at home. It had the flavor of the rice, beans and oil. Which for my part, is a good thing.

While heavily processed foods (even vegetarian and vegan) are never a good idea too often, they are a nice junk food treat once in a while. Overall, I enjoyed it and would purchase again. It's a good value, has good flavor and is quite convenient.

I saw some faux chicken patties there once too. I'm hoping to find them again and give them a try as well.
convenience foods veggie burger