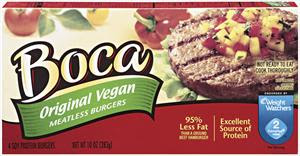 I tried Boca Burger vegan this afternoon. I was skeptical. I had eaten them years back and was unimpressed. But a lot of my tastes have changed since then and I imagine that recipe has undergone various alterations as well. Plus it's so difficult to find vegetarian burgers sans egg. But obviously if it's vegan it doesn't contain any egg.

The Boca brand was 2 for $6 at the supermarket and I wasn't going to get it because the frozen patties always disappointed me in the past. But when I took a peek there was a coupon attached to the box for another $1 off two. So that brought the cost down to $5 or $2.50 per box. So I went for it.

I'd had original boca burger in the past, but never vegan. But I wasn't too worried since I've developed a taste for pretty plain tofu. The vegan patties are shockingly pale when you first take them out of the package. They look like tofu. I had the urge to marinate them, but I refrained.

Instead I seared one in a very hot pan. Unlike actual meat burgers, in this case it's good to press down. There's no juice to be lost and we want to create a charred crust. When the patty was almost done I added some sliced garlic to the pan and browned that too.

I assembled the vegan burger on an everything bagel thin. Sliced kosher dill pickle, garlic, burger, ketchup, soy faux bacon bits. All in all I really liked the texture and the flavor.The texture was good with the crispy outside and the tender, warm middle. The flavor as expected was very mild, but really worked extremely well with the toasted garlic and the briny garlic of the pickle.

I still prefer a fresh homemade vegan burger over a frozen one, but I was thoroughly impressed with the Boca Vegan frozen burger patty. So impressed in fact, that I made a second one on the spot to take with me to work for lunch the next day.
vegan vegetarian veggie burger