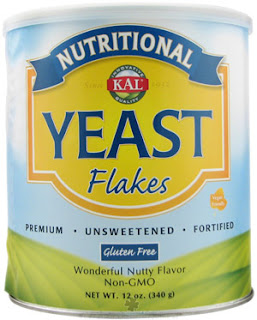 Nutritional yeast flakes are something every vegetarian and vegan need to know about. They are a source of complete protein. They are fortified with the elusive B12 vitamin amongst many other vitamins and minerals that do bodies good. Most vegetarians and vegan are well aware of the power of the yeast flakes. They need to be. Diets that eschew meat and or animals products need nutritional yeast to fill in those gaps.

The last time I went to buy some the cashier asked me how I used it. To which I replied that I sprinkle it on top of things like cheese. She was quite enthused with my answer. She agreed that that was how it was meant to be used. Although she noted that she was vegan and did not actually eat cheese. Which made me a little jealous cause I wish to be vegan but am weak when it comes to cheese. Cheese is just so good.

She said her friends mix it with water or milk and make shakes which she thought was disgusting and I agreed wholeheartedly. Yuck.

I once tried adding my yeast flakes to my coffee, which I normally take black. I couldn't really taste them through the strength of the java, but a lot of it sat at the bottom of the cup and I didn't really ingest it at all. So I've been sticking with the sprinkle like cheese method ever since. I particularly enjoy it over pasta and vegetarian chili. But it's also great on bean sandwiches and makes an awesome salad dressing mixed with white vinegar and some salt and pepper.