All Hummus Is Not Created Equal 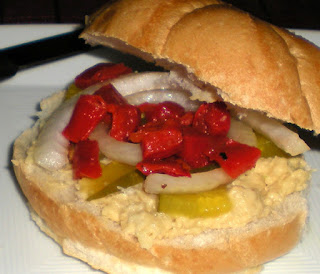 I've eaten exactly two brands of pre-made hummus. Sabra and Athenos. The difference between them is astonishing.

I used to make my own faux hummus with chick peas, lemon, garlic and white vinegar. Not traditional by any means, but I loved the taste. Just didn't love the effort involved.

When I tried Sabra hummus for the first time I was in love. The roasted garlic flavor is literally one of the best foods I've ever eaten. If I had to pick only one food to eat for the rest of my life it would be a toss up between Sabra roasted garlic hummus and Lightlife veggie burgers. If I could live a nutritionally sound life eating only those two foods I would have no complaints at all.

So when Athenos hummus was on a big half price sale I grabbed two tubs. How strangely different it is. I can't call it bad, just not quite right.

I read the ingredients like three times on both brands and can see very little difference. Athenos uses olive oil where Sabra uses soy bean oil. Olive oil sounds better in theory. But the Sabra is superior. Maybe it's just that Athenos doesn't have enough fat. It has half the fat of Sabra. As Alton Brown is so fond of telling me, fat holds flavor. It think Sabra also has a lot more salt than Atheno. Everyone knows salt makes things taste better.

So now I have two tubs of Athenos hummus and I'm not too crazy about it. But not to fear. I've discovered a few ways to make it taste good. So even if you're like me and don't like some brands of hummus you might want to try these suggestions. Perhaps with these techniques, you can save some money when a brand you're not particularly fond of is on sale.

One way it came out pretty good was on a sandwich. Sandwich fixings can save almost anything. I thoroughly covered the bottom of a kaiser roll with the hummus. Then added dill pickle slices, roasted red pepper chunks, raw white onion and some salt and pepper. It made a big difference.

It's also pretty good as a spread on plain bread if you top with fresh pressed garlic powder and black pepper.

But they way it came out really good was with a curry. I had previously made curry lentils and barley. Had not planned on eating them as a sandwich. But with an abundance of bread and a hummus to utilize I gave it a try.