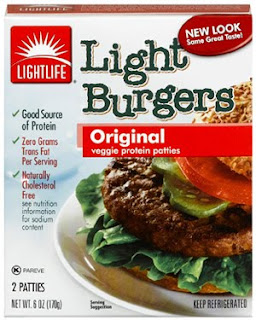 Today I got to try the Lightlife Original Veggie Burger for the VERY FIRST TIME! From what it looked like I expected it to be delicious and I was not disappointed.

Now, I've had all sorts of vegetarian burger patties. Morning Star Farms. Boca. GardenBurger. And lots of different flavors of those respective brands. I used to eat them all the time, back before I truly went veg, I didn't think about the egg content. Just liked that it wasn't meat. I don't eat most of them anymore because so many contain eggs. Some of them were pretty decent. If you cooked them in a frying pan and not the microwave. I used to like the Morning Star Farms cheddar infused one. But you still had to dress it up. Ketchup, pickle, onion, tasty bread. They're kinda small and expensive and not all that filling. And in actuality, though they got the job done meal-wise, they're kinda chewy and not big with the taste sensations.

So today I popped my Lightlife veggie burger cherry. Just threw it in a hot pan and let it sear on the one side. Flipped it over and did the same. It smelled great. The package recommended using cooking spray, but I didn't have any trouble with a dry non-stick pan.

They only come 2 per package. But these are big burgers. Their 2 are easily equivalent if not greater to 4 of the frozen fare. I can see where half a patty could be quite a satifying protein to a well-rounded meal. Evenso, I ate the whole thing just because I wanted to.

I ate it totally plain because I wanted to know the true taste and because it just looked and smelled good enough to eat that way. It was really, really great. I can't say enough good things about it. It truly blew me away. It's better than beef. I've only been vegetarian a little over a year, so I still remember what an actual hamburger tastes like. This tastes better. It's not greasy like real meat and it's packed with flavor. The texture and smell are spot on.

I ate about half just stand alone with a fork. It was that good. Then I crumbled up the rest into a simple iceburg lettuce take out salad. I have a picture I hope to add sometime soon. 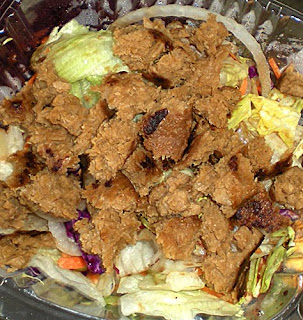 I think you could crumble this stuff onto just about anything and it would be delicious. Rice. Pasta. Soup.

By the time I was finished I was way overfull, but it was worth it.

If you've been eating those popular and mediocre frozen vegetarian/vegan patties you have to try Lightlife's. They are refrigerated, not frozen. They are vegan. And they are THE BEST!

Now if only major restaurant chains would use Lightlife burgers as their vegetarian alternative all would be right with the world.
convenience foods vegan vegetarian veggie burger