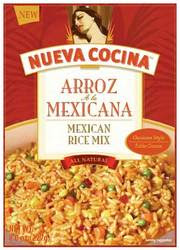 The best thing ever happened in the supermarket today. Actually two really great things happened. The first was a new discovery. Boxed rice mixes called nueva concina. Latin flavored bean and rice boxes straight from the heart of cuban country (florida). It doesn't get more authentic than that without sneaking over to cuba. Right on the front of the package it said vegetarian. Upon closer inspection of the ingredients I could find no reason that it wasn't also vegan.

I also liked that it has a very short, very simple ingredient list and that was a rather large package. 8 ounces. Most rices mixes tend to be smaller than that. It was on sale for $1.49... so had to get it. It believe it's $2.49 regular price. Which, you know, not cheap by any standard, but reasonable when compared with other brands that sell smaller portioned packages.

But my general rule is, if the flavored kind isn't on sale, then I'll just use plain rice and flavor it myself. I love the convenience, but will only pay so much for that luxury.

The Neuva Concina items that are vegetarian/vegan are red beans and rice, black beans and rice and mexican rice. There may be others. These are the ones I know of. I've not yet actually tasted the product. Bought it and am anxious to experience the flavors. Will report back when I know more on that.

Be sure to recheck at your local pathmark or a and p. They may have arrived.

One last interesting discovery was in the pathmark bakery section. Contrary to what Natalie Portman would have you believe there are fresh baked goods available that are also vegan. I mean, I live on the jersey shore. Not exactly the most vegan friendly place. This is the state that invented pork roll and cheese sandwiches and perfected the philly cheesesteak by using mozzarella instead. Yet at my local Pathmark I can find vegan fresh baked goods. I doubt their intent was to produce vegan pastries, but nonetheless that is what they've done.

It's basically puff pastry crust stuffed with sweetened fruit filling and then baked til crispy. They contain no eggs or milk or butter. They come in minis, full size and long cakes that can be portioned as desired. They have various fruit fillings like apple, peach and strawberry. It's really quite nice that I can get a vegan pastry so easily and for so little money and that it's good enough that non-vegans don't know the difference. Thank you pathmark. Keep up the good work.
desserts rice vegan vegetarian veggie burger