Since I had some leftover curry couscous I decided I would mix it in with that.

To cook the veggie sausage I just heated up a small non-stick frying pan on medium til it pretty hot. Added about a quarter of the tube. Put the rest into a Pyrex storage container in the fridge. 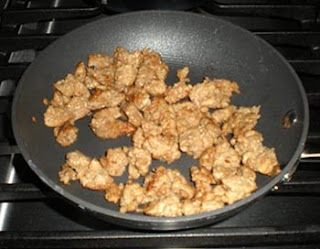 Once the pan was nice and hot I added the gimme lean and listened to the sizzle. Very nice sizzle indeed. Left it alone for a few minutes to brown that side. Then stirred it around with a spatula. As it got hotter and crispier I was able to break it up into little ground pieces. It was still kinda sticky so I decided to add a tsp of olive oil to the pan. I shoulda probably added it from the get go. Stirred often and did my best to brown it on both sides. All in all I cooked it for about 5 minutes. 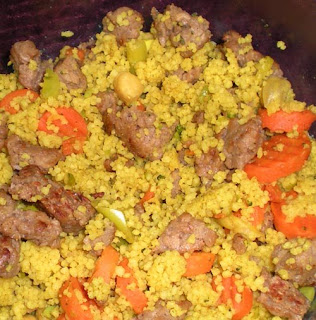 I then stirred it into my warmed up leftover couscous. I made sure to taste several pieces plain though. The first bite was kinda bizarre. It tasted like pork... how could that be?

So I took another bite. Still tasted like pork. I asked my meat-eating mother to taste it. 'It tastes like meat', she said.

It was truly astonishing just how much it tasted like the real thing. A tiny conspiracy theorist in my brain began formulating evil scenarios of how it might actually be pork.

But if the ingredients list is truthful and it no doubt is, there's no piggie in there. No animals or animal byproducts of any sort. It's not just vegetarian. It's also vegan.

I can't really fool anyone I know, cuz they all know I would never serve them meat, but I'm confident if I served this to a stranger that they would in fact be fooled.

I was never really a sausage person. Almost never ate pork even when I did eat other meat. But guilt free soy based faux pork tastes really good to me.

It went nicely with my curry couscous. It really tasted and felt like eating meat. I buy Near East Mediterranean Curry Cous Cous because it's vegan.

I wonder how the people at lightlife manage to create such accurate meat reproductions with mostly soy. I picture a wizard and and a lot of wand waving and possible souls being sold.
convenience foods vegan vegetarian