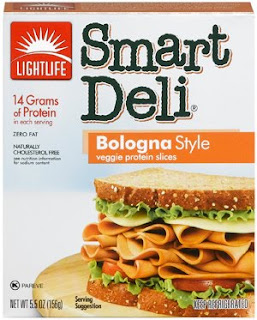 The bologna style is great. Really great. I love it. Perfect smell, flavor and texture.

The turkey and ham, I liked, but did not love. But that is just me. They had their merits. The texture was good. I just thought the flavor was lacking a little bit. IMHO the bologna style is better.

I still need to try the fake ground beef. I wanted to try the buffalo wings, but the eggs in the ingredients turned me off. I don't eat eggs.

I saw on their website they have all kinds of items I've never seen in my local stores. Sigh. Their veggie burgers look really good. And are vegan from the ingredients listed on their site.

Some of their stuff can be expensive. The ground beef is. $3.99 for that little packet seems extreme. But the deli slices and dogs are very reasonable. $2-3 per pack. And I get 4-5 sandwiches out of them. More out of the dogs. I just eat one at a time. Even when I eat two it's still 4 times.

Their bologna deli slices are great with pickle and onion. If you eat cheese they are supreme with borden american singles (which are vegetarian) or any of many vegetarian cheddar cheeses.

Their dogs are awesome with sauerkraut and some ketchup or mustard. Or cut them up and mix them into some mashed potatoes. Heaven.
sandwiches vegan vegetarian

RCollins827 said…
Thanks for reviewing some of our products. I'm so happy to see you've enjoyed most of them!

I would love to send you some of the products you're seeing on our website, but can't find near you. Please email me at Rachael@Lightlife.com!