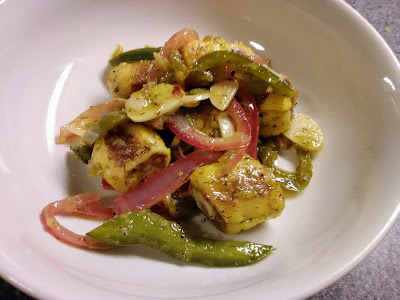 I had an inspiration. What if tofu could replace the eggs in Parisian gnocchi batter. Wouldn't that be something special. I'd never made a pate a choux dough before, but I'd seen Alton Brown make it on TV, so I was cautiously optimistic.

This whole process was trial and error for me. I wasn't really sure what was going to work or how well. I found that a few techniques worked with varying degrees of tenderness/crispiness/difficulty.

The first time I went the traditional route and poached the dough before frying it. This worked well in that the gnocchi were fluffy and tender on the inside and pleasingly crunchy on the outside. However, when the dough comes out of the water it is extremely tender until it's had a chance to cool. You  have to be careful with it and have a sheet pan ready to lay out each little pillow single file to rest. It's imperative that you let the poached gnocchi rest at room temperature for at least 15 minutes to cool and firm up before trying to saute them. You also need to cook it a lot less than traditional pate a choux dough. 30 seconds after it floats to the top is enough. Otherwise it falls apart in the water.

The second time I tried just piping out the dough on a sheet pan raw and then sauteing without boiling. This yielded a nice outer shell, but the inside was still not cooked. So it was necessary to finish them either in the oven or in the sauce. I opted to finish them in the sauce. This resulted in a soft inside and they absorbed a lot of the sauce flavor, but the outside was no longer crispy. They were dumplings more than they were Parisian gnocchi. So I guess, technically speaking the second version is not gnocchi, but dumplings. They were still very good though. Although, I would suggest if using this method that some baking powder might be a really good addition to aerate the dough a little

So I guess a future recipe could be vegan french dumpling dough to build off of what I've learned. Tofu really does create a tender dough that holds together nicely with a little bit of care in the preparation. It also offers a welcome dose of protein.

To create the choux dough I followed the standard recipe, for the most part... 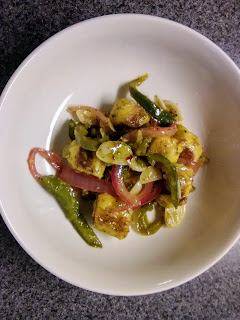 Bring milk, shortening, mustard and salt to a boil in a sauce pot. Make sure all the shortening has melted. Lower heat to medium. Add flour and stir vigorously with a wooden spoon. Continue stirring until the dough begins to stick itself and pull away from the sides of the pot. Keep stirring over low medium heat until the dough dries up a bit. About 2-3 minutes.

Transfer dough to stand mixer with paddle attachment. Mix on low adding tofu slowly until all is in the batter. Then mix on second speed until all the tofu is fully incorporated.

Bring salted water to a boil and them lower to a gentle simmer.

Pipe the dough into the water in small one inch pillows. Do it in batches. Only as many gnocchi as you can drop in 1 minute.

When they float, poach 30 second more then use a slotted spoon to remove them to a large sheet pan. When all the gnocchi are poached let rest at room temp for at least 15 minutes to firm up. .

Saute gnocchi in olive oil top and bottom until browned and crispy. All four sides if you're feeling ambitious. I tried turning the gnocchi with a spatula, a fork, a spoon. It was somewhat frustrating. I found it easiest to simply use my hands. If you can't do that I'd say a regular sized flateware spoon works best.

Remove back to sheet pan. When all gnocchi have been sauteed let rest again for 10 minutes at room temp.

For unpoached simply skip those steps. Pipe out on a sheet pan and then saute same as above.

When you're ready prepare your sauce.

If you're going the classic route with poached/fried gnocchi I would say just drizzle them with the sauce. Don't try to cook them in it. You'll lose all your work of crispy sauteed outside.

If you're using the unboiled version they will need to be finished in the sauce. Saute they in the sauce to coat for 2-3 minutes to finish cooking and allow them to soak up the flavors.