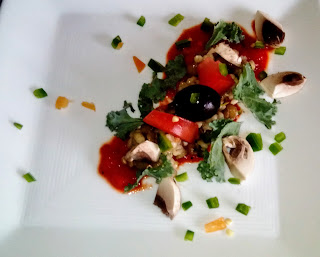 This is a really simple pepper puree that packs a lot of flavor. With just two ingredients, plus salt and pepper, it's incredibly easy to make, yet boasts plenty of excitement for your tastebuds.

Add peppers, liquid and all to your blender. Add 3-6 chiles de arbol. I added 6, but only one with the seeds intact. The rest of the chiles I broke open and discarded the seeds.

At least 1 tsp each salt and pepper.

Buzz it up and taste. Add more salt and pepper if desired. I like to refridgerate it for several hours to thicken it up.

It's awesome on sandwiches. It's also good on salad, pasta, beans.

When sandwiches can't include cheese I think that a puree such as this one really fills the void.

It's pictured above with red robin spiced and chpotle lime seasoned lentils and barley and an assortment of fresh veg.

But let your imagination run wild. This stuff is versatile. It would make an awesome gazpacho with some roasted roma tomatoes. And it's a great sauce or drizzle on most anything. Tofu marinade. Pasta topping. The flavor goes for miles.
mediterranean peppers spanish spicy vegan